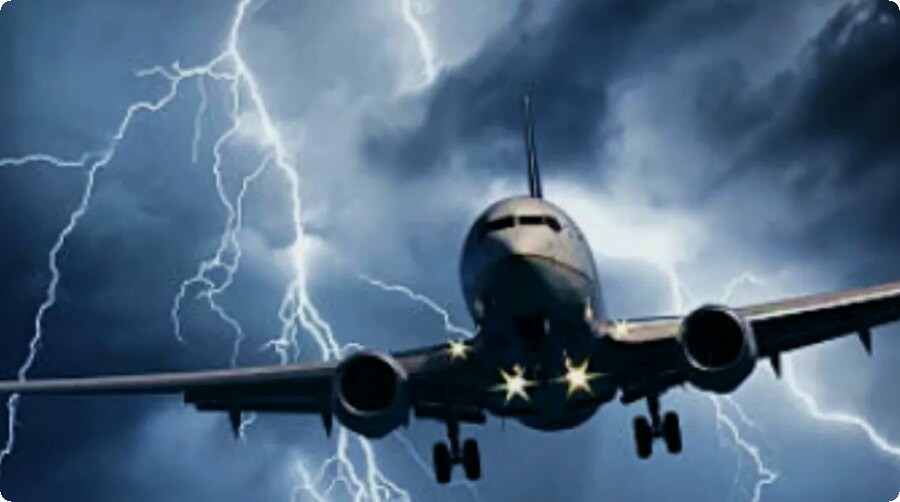 We bring to your attention something interesting about airplanes and flights on them.

Lightning strikes commercial aircraft surprisingly often (but they are designed to deal with it).

Many people may be flying near a thunderstorm and get worried when they see lightning strike around the plane. However, there really is no cause for serious concern. Lightning that causes planes to crash is incredibly rare.

Now, lightning does indeed strike planes quite frequently, on average about once per plane per year. This can seem incredibly disturbing and terrifying, and people might wonder why planes don't just fall out of the sky all the time.

The reason is that planes are incredibly well designed to deal with just such a punishment, as the design engineers knew that lightning strikes would be inevitable.

Most commercial airliners are made of aluminum, which essentially allows lightning to pass through the aircraft without major damage. While this may blind the pilot for a few moments, it really won't be a major problem.

Most pilots spend more time than this not looking straight ahead through the window. Now planes have been struck by lightning before, but the most notable examples were in the past, before we had even more safety features than we do today. While a lightning strike can cause a plane to crash, it's insanely unlikely.

Imagine that you are flying and the worst happens. The plane loses not only some, but every single engine. Most people think they are completely doomed now, but there is still hope.

Depending on how high the plane was, as long as there was no damage that caused it to lose control, a commercial jet can glide for a very long time without any engines at all and the pilot still has good control. Airplanes are designed to glide, and without engines you will quickly lose altitude, but at maximum cruising altitude a competent pilot can still fly about 40-50 miles.

It would still be scary to fly as a passenger - the lights would be dim and the oxygen masks would be released.

You would have to hope that the pilot can find a large enough area to land the plane safely within the time and distance they still have left to glide, or things can get very complicated very quickly.

However, if anywhere near an airport or airfield, you won't be in serious danger and the pilot should be able to bring down the plane for a forced landing.

The best way to buy cheap flights on europefly