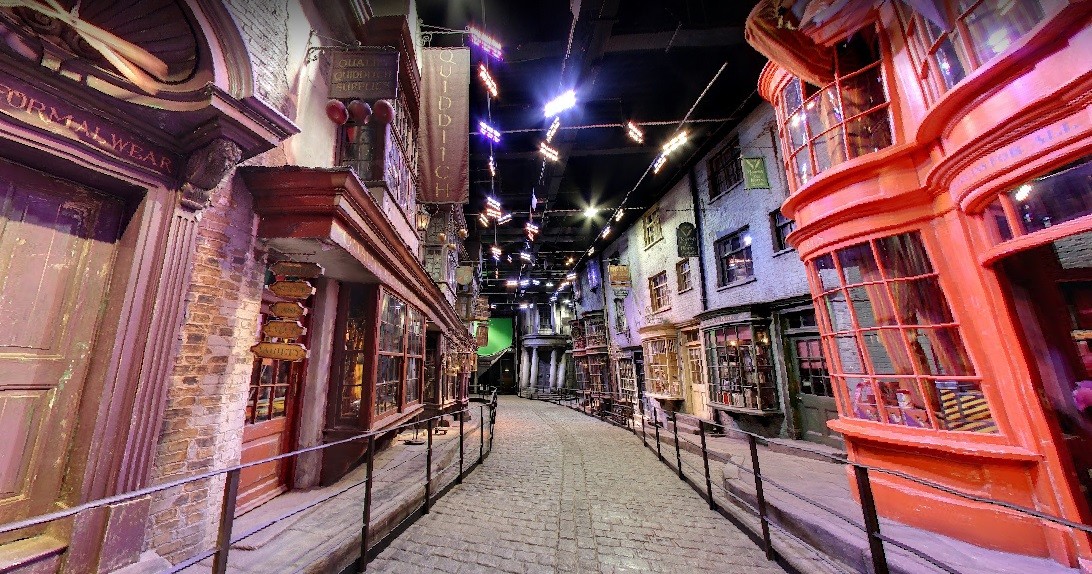 In the suburbs of London, which can be reached by commuter train in 20 minutes, there is an amazing, unforgettable and magical in every sense of the word museum - the Harry Potter Museum, located in Leavesden Studios. This studio is "native" to all films in the series (and there are almost 8 of them, which were filmed over 10 years!). Studio "Leavesden" - a former abandoned airport, which occupied several hectares of free land.

Empty for a long time, then her hour came for the studio, and she became a movie heroine. The second life of the studio was given by the first film "Harry Potter and the Philosopher's Stone".

Later, such iconic films as Star Wars, Inception with Leonardo DiCaprio and other films were filmed in the studio. Now this area is given over to a museum dedicated to the world of Harry Potter. Every self-respecting Potter fan should visit this place. Drooling runs when you start to list all those locations and objects that are located there.

Firstly, it's a big room. The real one, the one we see in the movie. If you are lucky enough to visit the museum during the Christmas holidays, then you can see it in festive decoration: Christmas trees, snow, ice sculptures. By the way, it is interesting that the walls of the large hall are doors. They are made so that after the next shooting, 400 people can easily and quickly leave this place.

Secondly, these are all kinds of dummies. Here you will see the "real" Dobby, hippogriff, Nagini and other inhabitants of the magical world. It is amazing with what meticulous patience these figures were made! Dobby, for example, has streaks on his eyes. If house elves also lived in our houses, in the houses of ordinary Muggles, then we could confuse Dobby with the living and real.

Thirdly, this is Dumbledore's office. Here, for sure, every fan falls into a sacred awe. Well, who has not dreamed of visiting the office of the director of the Hogwarts School of Witchcraft and Wizardry? Except Aunt Petunia!

Fourthly, you will have the opportunity to try your parsultang and open the famous door to the Chamber of Secrets (the real one, no cheating!).

Fifthly, all kinds of shops where you will leave more than one or two thousand. How can you visit such a place and not get a wand, try butterbeer, try on a school uniform, get your own Hedwig, or, say, dress in Dumbledore's robes (but this is a very expensive pleasure).

Sixthly, see the real model of the castle (which is 70% smaller than the real one). The music playing in this large hall where the castle stands makes you feel the solemnity of the moment! You certainly won't want to leave this room;) Lumos to everyone and, Merlin's beard, be sure to visit there!