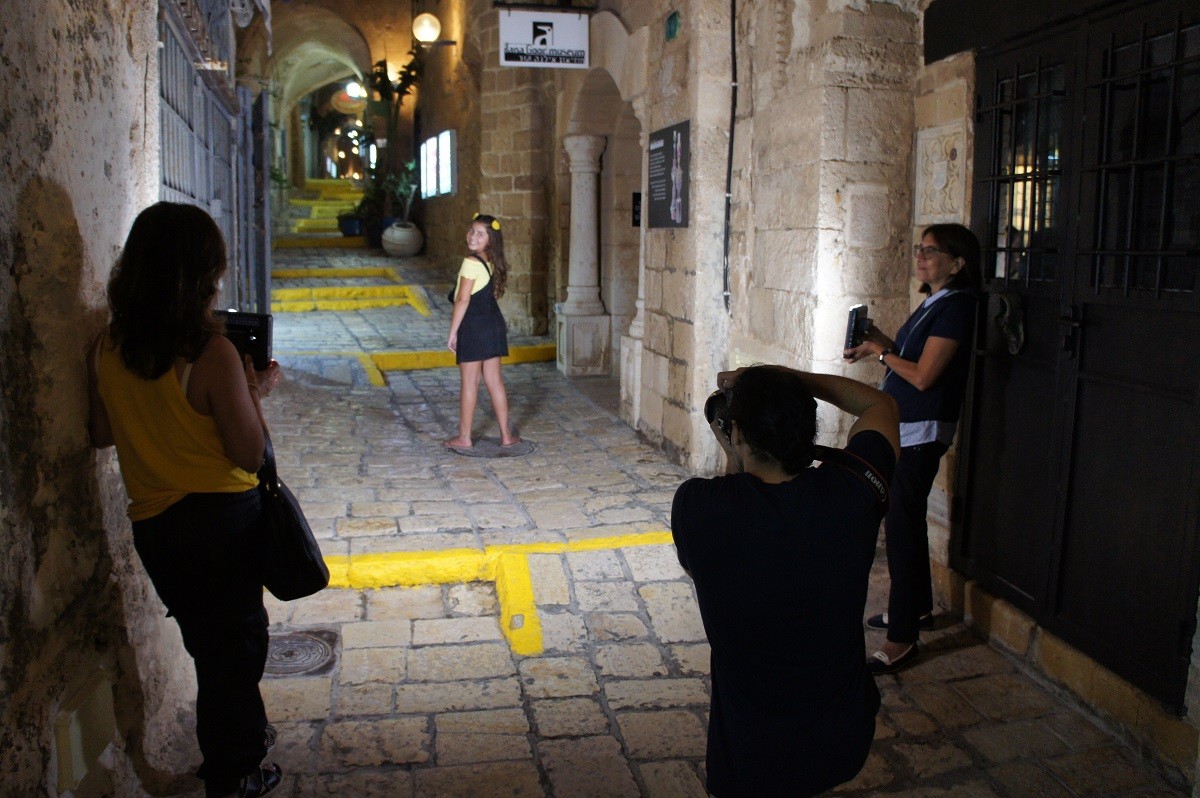 Passing by the Hasimta Theater, which is near the Ilana Gur Museum, we saw a rather unusual exposition.

At first we thought that this was one of the theater's posters that advertised the nearest performance, since the exhibits were placed in close proximity to the stand with theater announcements. However, this was not the case.

But what is it? We were at a loss for guesses. Maybe it's a contemporary art gallery? Yes, she is located at a different address, but maybe her work is displayed as an advertisement at the other end of the zodiac signs quarter? And we were only partially right. To help us, of course, came the great and mighty Internet.

Yes, these were the works of contemporary Israeli artists. But this is a separate gallery, it is called an open-air Street Gallery. It was created in order to support young talents, so that their works would thus gain some fame and popularity.

So, what have we been presented here…

The picture is called "Shooting a joint portrait”, a joke. Here two African women in bright national costumes pose for a photographer, and two men “hold" a white background. This is the work of a novice photographer Yarden Rokach called "Roots" (the work was presented by the Holon Institute of Technology). And women from Uganda are depicted here, it is to this country that the photographer has dedicated many of his works.

This work is already from another branch of art - street graffiti. Either it's some kind of Pippi - long red stocking ("red sox"), or a local evil witch-queen. The author is Lipaz Golan. The work has the title "Redesign Your Childhood Station" - I translated it as "Reconstruction of your infancy". It remains only to guess what the meaning is here. The work was presented by the Shenkar College - the Shenkar College of Engineering, Design and Art in Ramat Gan.

And here is another modern painting with a strange piano in the form of a stroller, called: "Family Time". The author is Ysca Elishevitz. The picture is presented by the Jewish magazine Emunah.

But this is purely my personal creativity. Photo shoot of a little Israeli girl on the Fish Alley of old Jaffa. And the name, please, come up with you!

But not only on the Alley of Fishes there are exhibits of such a street exhibition, but also on others, for example, on Gemini Street. You will pass through the zodiac signs quarter - look carefully. All the presented works, of course, are reproductions, but this does not deprive them of artistic value.

The best way to buy cheap flights is here