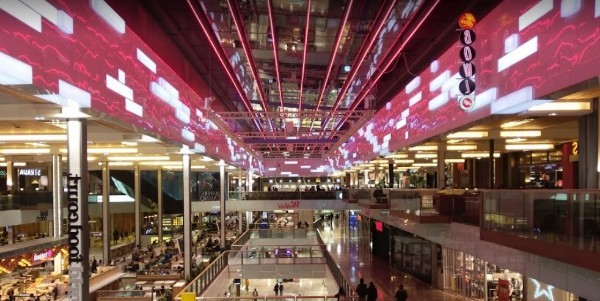 Shoppers rushed to the door of the Westfield Stratford City store as soon as the opening was announced. The giant shopping center is located just behind the Olympic Park in East London.

The £1.45 billion shopping complex includes 300 shops, 70 restaurants, a 14-screen cinema, three hotels, a bowling alley and the UK's largest casino. The entrance to the Olympic Park was organized through it.

Special guest pop star Nicole Scherzinger performed at the official opening ceremony of the mall. London Mayor Boris Johnson was also present. According to eyewitnesses, an unpleasant episode happened to him - during a welcoming speech, a metal beam fell from the ceiling and landed just a few meters from the mayor's head.

People started lining up about 2 hours before most stores opened. Olympic athletes synchronized swimmer Jenna Randall and rower Andy Triggs-Hodge signed autographs at the opening of the new Next store.

And Olympic champion Colin Jackson took part in the opening of a branch of Lloyds TSB bank. Customers of the mall could take pictures with the 2012 Olympic Torch.

To date, 95% of retail space has already been leased. It is alleged that the shopping and entertainment complex is able to provide up to 8,500 permanent jobs.

The main route to the Olympic Park will pass through the shopping complex. Huge screens located along the main aisle broadcast the main sporting events of the 2012 Olympics. This object is included in the city guide - a guide to London.