Sanctuary of Truth in Pattaya 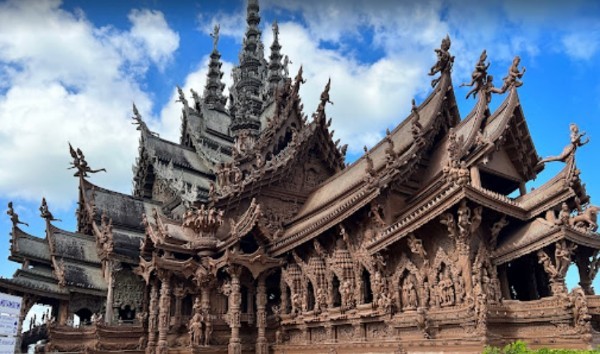 Eastern religion has many magnificent shrines that amaze the imagination. But, none of them can be compared with the Sanctuary of Truth.

The architectural and religious creation is fundamentally different from other analogues, which has earned constant attention from tourists.

A bit of history

Despite the atmosphere of mystery and ancient appearance, the temple was built relatively recently - in 1981. It is the youngest and most popular architectural monument.

Since the building was built without a single nail, the structure will constantly need restoration - this is one of the main features. The founder of the idea of ​​​​creation was a respected and wealthy man named Lek Viryapan. He decided that the whole world should know about the great traditions of his homeland. Lek was informed that the day of his death would come exactly when the construction of the Sanctuary of Truth was completed.

In this regard, the millionaire constantly puts off the finishing touches. Thus, almost every month the temple is repaired or the building is decorated.
Initially, the shrine was a kind of museum.

But the mental atmosphere fascinated the parishioners, and they lifted up their prayers to heaven. Since then, the architectural monument has become a real Sanctuary.

What is remarkable about the Sanctuary of Truth?

The architectural monument is located in a surprisingly picturesque place. It is located on a rock, the bottom of which is caressed by the waves. Being here, tourists have an impressive view that is unlikely to be found anywhere else.

The temple itself is a curiosity - it is made of wood of a special kind, decorated with carvings that open the eyes to people and unseen animals. Taking the first step into the temple, a person immediately plunges into another world. Tourists are accompanied everywhere by statues of Buddha and mythical gods, which are dressed in wood. The shrine tells the history of the culture of Thailand, shares secret secrets and revelations.

Why you should visit the Sanctuary while in Thailand:

- the opportunity to find yourself inside the tallest building in the world, made without a single nail;
- an amazing atmosphere that reflects the culture of the eastern lands;

- the opportunity to enjoy the beauties of the temple and ask for the fulfillment of desires that will surely come true;
- episodes of the filming of the film "Love in the Big City-2" were held here.